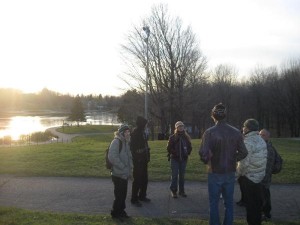 Taking a walk to practice awareness as explained in the course in Montreal, Canada

In this topic, Belsebuub explains how there is a spiritual aspect to sexuality, as well as a lustful, ego-based aspect of sexuality. He explains that any study of self-knowledge without looking into lust would be incomplete.

“There are as many egos of lust as there are grains of sand that you can hold in your hand.”
~ Belsebuub1

Belsebuub says that lust is the foundation of the egos and that it can enslave a person. He says that in the spiritual work the sexual energies are used with alchemy to awaken, but that egos of lust fight to stop the esoteric work from taking place.

Belsebuub explains that in the animal world, one can see very basic egos of lust operating—for example those used to find a suitable mate and to procreate. He explains that egos of lust work in much the same way in humans, where a basic attraction between sexes forms the basis of male and female sexual behavior that continues the species. However, he says that feeding lustful egos can create more desires and change the nature of basic sexual attraction over time:

“With the creative mind, the egos multiply from life to life, creating one desire after another, taking energy away from the main attraction, dividing it into many parts, many different fantasies and egos—these can even alter the sexual act itself.”
~ Belsebuub2

Romance and Falling in Love

Belsebuub says that true love exists and that it comes from the essence. He says this is different from the states generated by lust.

He explains that what is commonly known as “falling in love” is nature’s way of getting two people to come together to mate and produce offspring and stay together in order to take care of their development. Without true love, inevitably the intense sexual desire and the common “falling in love” feelings produced by the egos of lust soon fade and relationships easily fall apart. However, with alchemy, “the mutual magnetism keeps and increases the mutual attraction” between partners. Belsebuub says that alchemy and true love are the cement that can hold a relationship together.3

The Multiplication of Sexual Desires

Belsebuub writes that with egos manifesting and taking energy from the centers, they become unbalanced, and that sexual energy then goes into the other four centers. Because the energy in the sexual center is different than that in the other centers, the energies then become mixed up and polluted. This leads to sexual egos in movement, emotion, and thought, for example thoughts which are compulsively about sex. The more a fantasy or desire is fed, the greater the hold the ego of lust has upon a person, and the more dissatisfying that fantasy becomes. When this happens, previous sexual desires become less attractive and new ones override them, with each new desire altering the basic sexual attraction further until it becomes completely removed from its original point and nature.

“Egos of lust can produce all sorts of distortions. Sexual egos in the instinctive center give rise to monstrous outcomes, rapes, murder, etc. Lustful thoughts compulsively invade the intellectual center, sexual feelings pervade the emotional and motor centers, and sexual pleasure hooks the person coming back again and again to attack them.”
~ Belsebuub4

Lust and the Subconscious

Belsebuub says that lust can make up a large part of the subconscious, unconsciously motivating a person’s actions, words, and thoughts. He explains that although it is the strongest pleasure, lust also sustains and feeds all the egos. He writes,

“The thoughts, feelings, emotions, spiritual experiences, and consciousness are all modifications of sexual energy; the more cleaned of lust they are, the more spiritual feelings can be had. The more lustful, the more the egos and their dirty energies predominate.”
~ Belsebuub5

Belsebuub explains that chastity is not just the absence of lust, but a divine energy that actually repels lust. He states that it is built by eliminating the egos, balancing the centers, and practicing alchemy.

Belsebuub states that will and determination are needed in order to not allow the egos of lust to feed.

Belsebuub concludes the topic by stating the following:

“The egos close the door to love; the elimination of the egos opens the door to love. Love grows in the couple that practices alchemy; with it each grows closer to the other. This is the foundation of true spiritual work. From it the bliss of the being eventually emerges, true peace and happiness are found, the chains of the wheel of life are broken, and one reaches the heavens and liberation.”
~ Belsebuub6

Read questions and answers from week seven of the course here