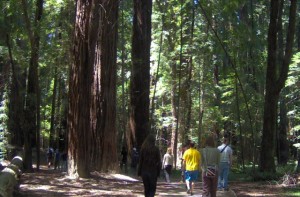 Practicing the awareness exercise from Searching Within on a forest retreat walk. California, USA, 2007

In this topic, Belsebuub defines wisdom and understanding as qualities of the consciousness, and emphasizes that acting with them is integral in order to face and respond well to the situations of life.

He explains that throughout our lives and all the constant interactions between people, mistakes are made and arguments arise due primarily to a lack of wisdom. Because wisdom is a quality of the consciousness, Belsebuub says, it is therefore activated when a person is in awareness.

Belsebuub states however that the capacity of consciousness is limited in most people, and therefore the degree of intelligence (i.e. wisdom) that a person can possess is also restricted. He explains:

“The problem is that the free consciousness is only 3 percent in an ordinary person (I use the word ordinary to mean the person who has done none of this esoteric work), while the other 97 percent of consciousness is trapped within the egos, trapped within those individual psychic elements. So a person consists of 97 percent subconsciousness, which is why the behavior is the way it is and why life is spent so much in those lower states and in a daydream.”
~ Belsebuub1

Belsebuub says that all the egos within the subconscious each have their own agendas, ways of thinking, and inner states that they bring and which influence our behavior. As a result, he points out that true wisdom is lacking in many of our actions, because a person often acts based upon beliefs, desires, moral codes, impulses, and egoic instincts rather than through consciousness. Belsebuub says that this is ultimately a result of having so little free consciousness and it not being activated throughout daily life.

By eliminating egos and replacing them with (and thereby increasing) consciousness, he says, one can increase their capacity for wisdom and understanding, and will be in a much better position to face and respond to the situations that arise in life.

Belsebuub continues by explaining that it’s not only in daily life, but also in dreams where one can watch for and uncover egos. He states:

“Often the different states that are normally shut off from everyday life are seen in dreams, where the norms of society are taken away and the subconscious roams, living out its fantasies, its pleasures, its fears, etc.

Belsebuub explains that gaining self-knowledge is part of an overall work undertaken in walking the esoteric path. He says that the esoteric path is the process by which an ordinary human being can transform into a spiritual being.

He outlines that there are three essential things that need to be done in order to walk upon it: “Disintegrating the egos, practicing alchemy, and helping others in their spiritual progress.”3

Belsebuub says that those who walk upon the esoteric path successfully can merge with higher, spiritual parts of their own Being (which the consciousness is a small part of) as they go along it, and upon doing so, divine happiness and peace can truly be felt within. Furthermore, he states that “the ability to feel superior spiritual emotions and the ability to instantly comprehend things rather than being caught up with the mind” are also developed by a person who takes up this path.4

Belsebuub states that the consciousness has many inherent qualities and faculties, which can be activated by being aware, and can also be further developed and strengthened by taking up the esoteric path.

Love, happiness, peace, and faculties of extra-sensory perception including intuition, clairvoyance, clairaudience, telepathy, and polyvision are just a few examples he gives of the qualities and faculties of the consciousness, and he goes on to describe each of them in more depth. He states that the egos and the swings of pleasure and pain are obstacles that stop these qualities and faculties from expressing themselves through a person, as they keep them from awareness, which activates the consciousness.

Belsebuub also points out that:

“Modern life generally is not conducive to the acquiring of self-knowledge; it tends to absorb one with its constant distractions, advertising, amusements, and pleasures.”
~ Belsebuub5

“To achieve [the work of self-transformation] takes determination and the building up of a continuity of effort and a clear purpose and goal.”
~ Belsebuub6

Belsebuub concludes the topic highlighting that by gaining self-knowledge and increasing consciousness, people can change from being “victims of the circumstances of life” into people who live life with greater awareness, gaining “freedom from the enslavement of the egos and a whole new way of being.”7

← Week Two: The Components of the Psyche