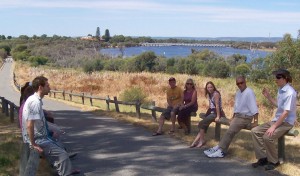 Practicing the exercises from the course on a hike in Perth, Australia

In this topic, Belsebuub explores the psychic faculty of intuition: what it is, how to activate it, and its many uses in daily life and within the context of the spiritual path.

Belsebuub defines intuition as: “a sense that allows us to capture certain kinds of information that we could not otherwise get from our mind or from our five senses.”1 He says that everyone has this sense to a certain degree and most have probably experienced it, but that normally we don’t develop or pay attention to it—usually when an “intuitive hunch” arrives, the mind comes in and overrides the hunch, and then later we say we should have “followed our feelings.”

He says that because the intuitive information we receive reaches us from a spiritual part in the higher dimensions, it means we could be forewarned of danger for example, because events that take place physically often take place in the higher dimensions first. However, once the connection between the spiritual part and the psyche in the physical body is interfered with by the mind through its reasoning, then the intuitive information is quickly lost.

Belsebuub gives a few simple examples to illustrate how it works, such as having an intuitive hunch that a particular line in the supermarket will go faster even though it has much more people in it and then once you move to the shorter line, there’s a problem with the credit card machine in that one and it ends up taking much longer than the one you initially felt would be faster; having an intuitive hunch not to sit in a particular seat on the bus, and a few minutes later there’s a leak there and people get all wet; or being able to find your way to a place you need to go to if you’re stuck without a map or directions by following the pull or feeling guiding you towards it.

Besides being forewarned of danger and helped along in general in daily life, Belsebuub says that intuition can also help with the interpretation of symbols and teachings in dreams and the astral, whereby you can intuitively capture their deep meaning. He also says that through intuition, you can tell if a being that appears before you is good or evil just by looking at them and using that sense. Finally, he points out that intuition can even be used to:

“Capture the reality of cosmic truths and esoteric scriptures, although for the reasoning of the mind a particular thing may seem impossible, intuitively you know the way it really is.”
~ Belsebuub2

Belsebuub explains that the sense of intuition works to its full potential when someone is practicing the spiritual work in their lives, and there are ways to increase it. He says by learning to use and trust it, by increasing it with the spiritual work, and by using a mantra it can increase in its functioning.

A mantra that acts on the chakra of the heart will increase intuition, Belsebuub says, because the information that comes from the spiritual part to the physical body is sent to a tiny atom in the heart, and so if the heart chakra is not working well then we will miss out on the information. Belsebuub introduces the mantra “O” as an example of a mantra to temporarily activate the heart chakra, and explains that it can be activated fully and permanently by doing the spiritual work. He concludes the topic by explaining how to practice the mantra.

The weekly exercise for week six is to try and develop intuition by practicing the mantra O as explained in the topic.

Belsebuub says that the mantra can be practiced when you are able to fully concentrate upon it while seated or lying down in a comfortable position, and not while doing other activities. He suggests to start by pronouncing it for ten minutes each day at the beginning of the week and to gradually increase the time if you feel comfortable with it as the week goes along, with the maximum being an hour if you have the time for it.

The other aspect of the exercise is to watch out during the week for any intuitive hunches you may have. Belsebuub points out:

“[Intuition] appears of its own accord so you can’t make it happen; you just have to try to recognize that ‘hunch’ whenever it appears.”
~ Belsebuub3

In addition to watching for any intuitive hunches during the day, Belsebuub suggests to also see whether you can intuitively capture the meanings of your dreams better, and to keep going with the practice of self-observation too.

Read questions and answers from week six of the course here